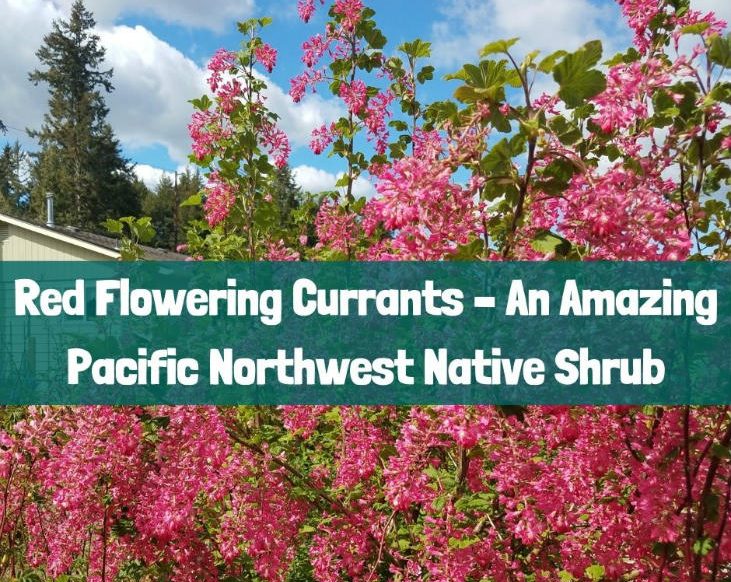 Every spring, I look forward to seeing all our red flowering currants burst into bloom. This happens before most other plants have even started to leaf out. The deep pinks, pastels, and occasionally white flowers of these currants really do usher in spring—often blooming just before the official first day of the season. But these great Pacific Northwest native plants bring a lot more than their beauty. Let’s dive into these amazing native shrubs!

As a thank you, patrons can gain early access to our podcast episodes and unlock exclusive content to make our living world come alive.

Posts may contain affiliate links, which allow me to earn a commission at no extra cost to you. Your purchase through the links helps me create content like this post (full disclosure).

Red flowering currants (Ribes sanguineum) were one of the first native plants that I started growing here. I was getting them in the ground just a few months after we bought our property.

I wasn’t very familiar with them at the time, but they checked a lot of boxes for what I was looking for. Plus, I’d seen them blooming around the area and I thought they were lovely.

So what do red flowering currants bring to your property? Well for starters, as a native plant, they help support a greater amount of wildlife diversity. But they also do so much more. Here are the highlights:

Plus, they’re quite drought tolerant and they don’t require extra care here in western Washington.

They really are a great all-around native shrub, and a good option if you’re looking to add more native shrubs to your property.

But red flowering currants are just one example of a fantastic native plant. There are many more out there for you to discover! And to help you keep track of them all, we’ve made a native plant tracker that you can use. Don’t forget to grab your copy so you can start keeping track of all the amazing native plants you discover.

Getting Started with Red Flowering Currants 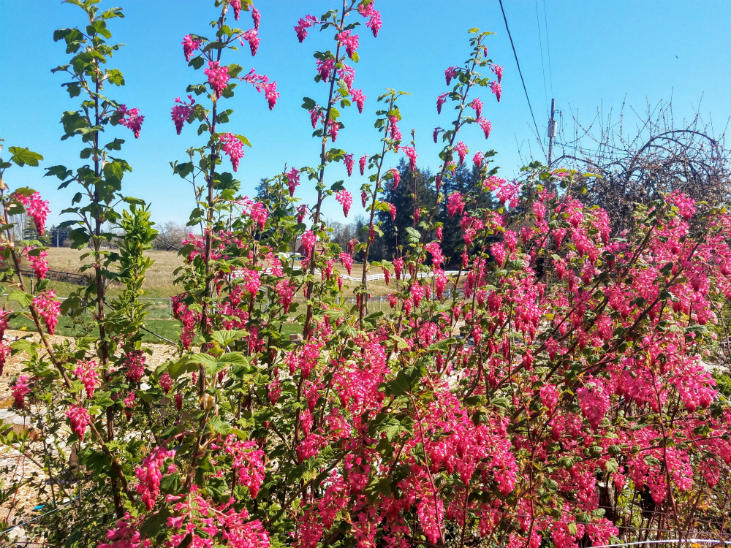 I really love how beautiful red flowering currants are. They really brighten up the early spring landscape.

Red flowering currants are a very resilient native shrub that can be found growing up and down the west coast of North America, from California up into British Columbia, and even a little bit into northern Idaho according to the USDA.

Because of how beautiful they are, you can often find cultivars for sale from regular nurseries if you live in this plant’s native range.

But those cultivars are often fairly expensive. A better option is to get some from a native plant nursery. I’ve got some links to sources for you at the end of this section.

Though I’ve had some lose a branch or 2 during really dry summers. But most don’t seem bothered by summer droughts.

In fact, they’re not a big fan of wet feet, and they do best in well drained soils that don’t become saturated during the winter. They’re not a wetland plant. But even in my heavy silty-clay soils, my red flowering currants have all done beautifully.

Like other native plants, they’re well adapted to the climate and growing conditions in our area. Once established, they don’t require extra care to thrive.

Red flowering currants are generally found in open forests and woodland edges where they get a mix of sunlight and shade. Though you will find them growing out in full sun too, if the site isn’t too dry.

And while deer will sometimes browse on them, I’ve found that they tend to be left alone. Though I would still protect your plants when they’re young.

Another great thing about red flowering currants is that they live stake fairly easily. This means that you can cut off a woody branch in the fall or winter once your red flowering currant has gone dormant, and then just stick it in the ground. That stick will then root and start growing into a new plant.

I’ve found the resulting new plant is slow to grow for the first couple years, but then grows fine after that. Despite their slow start, the majority of live-staked red flowering currants seem to survive and grow fine.

Wait till the red flowering currant has gone dormant and lost all its leaves—late November and into December is a good time to do this. Then take a cutting from a first-year branch—a branch that just grew during the previous growing season. Once you’ve got your cutting, just stick the bottom of the cutting in the ground down as far as it will go without bending or breaking it. You want at least 2-3 buds on the part of the cutting that is still above ground.

If you get a few red flowering currants established on your property, you can easily add more just by using live staking. A good general rule is to put 2-3 live stakes in for every 1 plant you ultimately want.

Here is some more information to help you get started with red flowering currants. 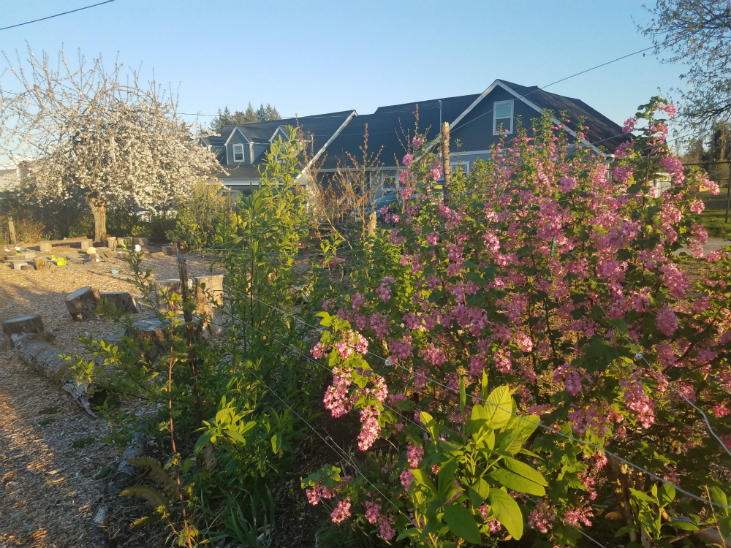 I’ve planted red flowering currants in all of my hedgerows, and the wildlife just love them.

But these great native plants provide a lot of benefits for wildlife.

Because they flower so early, they’re a critical source of food for hummingbirds, bumblebees and many other pollinators.

Most of the time, there are very few other flowers available for pollinators.

We get tons of hummingbirds visiting our red flowering currants each spring. It really is fun to watch them zipping around to all the bright red flowers.

And I’ve also noticed that songbirds love to take cover inside the red flowering currant bushes. Especially when they’re grown as part of a hedgerow or thicket.

But you can also eat the currants, though I’ve found them to be seedy and not that tasty.

The flowers, on the other hand, make a good early-spring tea.

I haven’t tried doing this, but the currants are supposed to be sweeter if you dry them so they look more like a raisin. You could also try mixing them with other berries to make fruit leathers, smoothies, etc.

Or you can just leave the currants on the bush for the birds and other wildlife. I’ve found that by the end of summer, almost all the currants have been eaten by wildlife.

For me, red flowering currants really are a plant that I plant to give back to the land and to the wildlife that call it home. As a native plant, it supports a wide range of wildlife, including picky specialist insects that rely on it to survive.

But of course, I also love how beautiful they are. They simply belong. Red flowering currants make a wonderful addition to any property here in the Pacific Northwest.

Thanks to our wonderful patrons for supporting this site

As a thank-you for supporting our mission, patrons gain exclusive benefits based on their support level. Benefits include early access to our podcast episodes and show notes, and instant access to our complete library of 50+ cheat sheets and other content upgrades.

Why You Should Grow Miner’s Lettuce

Getting Started with Native Vegetables

Daron is a restoration ecologist, lifelong gardener, and founder of Growing with Nature. He created this site to help people enjoy wildlife, grow food, and help heal our living world. He has managed the restoration program for a local non-profit, and he’s applying principles of restoration and permaculture to transform his property in western Washington to forests, wetlands, hedgerows, food forests, and permaculture gardens. He holds a Masters in Environmental Studies and an Associate of Applied Science degree in Water Resources. He loves sharing the joy of growing food with his two beautiful children.

Please log in again. The login page will open in a new tab. After logging in you can close it and return to this page.